Falmouth lifeboat station was established in 1867, 43 years after the Royal National Institution for the Preservation of Life from Shipwreck was founded by Sir William Hillary in 1824. His vision for a dedicated service for saving lives at sea became a reality on 4 March of that year. During the early 19th century there were about 1,800 shipwrecks a year around the British Isles coast. The new Institution was to be supported by donations and annual subscriptions as it is today. The charity’s name was changed to the Royal National Lifeboat Institution (RNLI) on 5 October 1854.

An entry for February 1867 in RNLI records for Falmouth stated: Some terrible wrecks occurred in this neighbourhood and attention was directed to the desirability of stationing a lifeboat at Falmouth. The inhabitants of Gloucester, who had contributed the sum of £450 for a lifeboat station, urged that their boat might be placed in this locality.

A number of locations along the coast were considered but it was decided to place the lifeboat station in Falmouth and the new lifeboat the City of Gloucester, a 33ft 10 oared self-righting pulling and sailing lifeboat, arrived in the port in April 1867. As the people of Gloucester and the City’s RNLI Branch had raised the money for the new boat and its carriage, the lifeboat was taken to Gloucester before coming to Falmouth where it was named and launched at the docks on 9 April. This lifeboat served at Falmouth for 20 years and in that time only launched on 10 occasions without saving any lives. 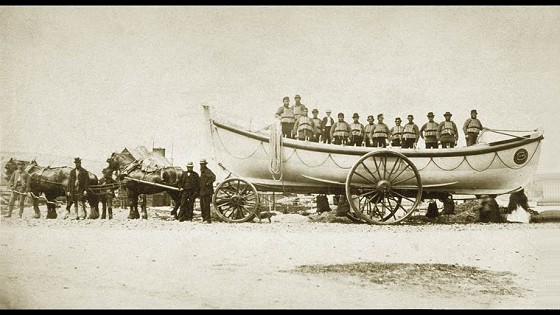 Currently, Falmouth is one of 14 lifeboat stations in Cornwall and the Isles of Scilly and is equipped with the all-weather Severn class lifeboat Richard Cox Scott and Atlantic 75 inshore lifeboatEve Pank.

The station covers the area from Black Head in the west to Dodman Point in the east including the Carrick Roads, River Fal and the tributaries. The all-weather lifeboat can operate up to 100 miles out to sea while the inshore lifeboat is ideal for work close to the shore and up the rivers and creeks of the Fal Estuary. In the early years, it wasn’t uncommon for Falmouth lifeboat to go several years without being called out on service. In contrast, Falmouth lifeboat station is now the busiest in Cornwall and one of the busiest in the south-west. In 2016 Falmouth lifeboats had 86 callouts (all-weather lifeboat 30 times and inshore lifeboat 56 times) and its volunteer crews saved three lives and rescued 76 people.

The total number of launches for Falmouth lifeboats from 1867 to the end of 2016 is 2,498 with 440 lives saved and 1,709 people rescued. The type of incident that the lifeboats get called out to are very varied but include: people being cut off by the tide; kayakers, windsurfers, sailing boats and divers in difficulties; boats with mechanical problems or water ingress and medical evacuation. The station currently has 24 volunteer crew members to ensure that both lifeboats are always available when the pagers go off. The all-weather lifeboat has a crew of seven plus a doctor if required. The Atlantic 75 inshore lifeboat has a crew of three.

All the crew are highly trained in the skills they need to fulfil their role including casualty care. This training is carried out at the station and at the RNLI College at Poole.There are, of course, other volunteers at the station helping to ensure that the lifeboats are available to launch to help save lives at sea. These include shore crew, operations personnel, station management personnel, shop staff, guild members and fundraisers and boat guides. Since its foundation, the RNLI has awarded over 2,500 medals - gold, silver and, since 1917, bronze for gallantry and bravery.

Eleven medals have been awarded to people for rescues in Falmouth: two gold, five silver and four bronze.Of these,one silver and the four bronze medals were awarded to Falmouth lifeboat crew members.  The details of these rescues and more on the station’s history can be read about in the new book Falmouth lifeboat 150 years of saving lives at sea 1867-2017, published to commemorate the station’s 150th Anniversary.

With special thanks to the Falmouth RNLI and their wonderful crew.