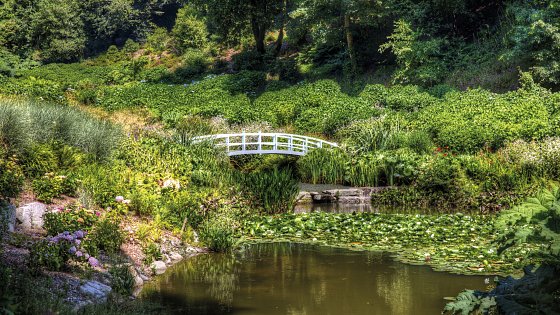 When you sit on the Terrace at the Royal Duchy Hotel and gaze out at the clear blue waters of Falmouth Bay, the palm trees that frame the view remind us just how mild the climate is in this part of Cornwall.

The area around Falmouth (and here comes the science bit) has soil that is well-drained because of the presence of granite. It’s rich and loamy and slightly acidic, allowing many species to thrive despite the proximity to the sea which brings winds and salt. And the climate is mild which is ideal for plants used to warm temperatures, hence the presence of so many “Mediterranean” gardens.

When we think of the archetypal “English” Garden we are actually looking at plants which began their lives on the other side of the world. Many of them can be seen in abundance in the great gardens of Cornwall – magnolias, camellias, rhododendrons, gardenias, azaleas – the fruits of the labours of Victorian plant hunters.

Men like Cornish brothers William and Thomas Lobb risked life and limb (literally – Thomas suffered a leg injury in the Philippines and had to have it amputated) to collect rare specimens from places like China, India, Malaysia and the South Americas for landowners who wanted to demonstrate their wealth and sophistication.

At the Royal Duchy Hotel we love helping our guests to relax and unwind and we think there’s no better way than a day in the fresh air exploring a beautiful garden. So here are our top seven favourite Cornish gardens – most within half an hour of the hotel. That’s one for every day of the week!

The Lost Gardens of Heligan

The gardens are as romantic as the name suggests. Over 200 acres of working Victorian gardens, walled gardens, fruit houses, lawns, lakes and ponds where lots of exotic species, including tree ferns and bamboo, thrive. Yet, for over half a century, the gardens were neglected and overgrown. The Heligan Estate near St Austell suffered when almost the entire workforce of gardeners died in the First World War. It was the discovery in 1990 of a plaque in a tumbledown workroom which altered Heligan’s fortunes. “Don’t come here to sleep or slumber” ­it read, with the names of the estate workers and the date, August 1914. With the men gone the estate floundered until a chance encounter turned her fortunes around and Heligan flourished once more.

This 26-acre garden at Mawnan Smith, which cascades down a steep valley to a beach and the river beyond, is another great jewel saved from neglect. It is a lush place, rich in huge sub-tropical tree ferns, giant gunnera and palms in a wooded ravine above the Helford River. The garden was first planted in the 1840s and developed into a unique collection of rare and exotic specimens. But it fell into neglect until bought by the Hibbert family in 1980. They helped rescue the gardens to create a magical place, one of the Great Gardens of Cornwall. Today it is run by a Trust which protects the gardens, including two acres of beautiful China blue and soft white hydrangeas which lead you down a valley to the Mallard Pond and the beach beyond. Children’s trails, adventure play areas and dogs welcome make it a very family friendly garden.

Take the ferry from Falmouth to St Mawes, walk just half a mile to Lamorran House overlooking the bay, and you will be transported to warmer climes with a romantic Italianate subtropical garden. At this point on the Roseland Peninsula, three sides of the garden overlook the water allowing many exotic species to thrive including tree ferns, cacti, proteas, palms and agave. The garden, which is open to the public on Wednesdays and Fridays, has several different areas including Venetian style, temples and archways, a Japanese influenced water garden, a walled garden and a terrace which overlooks the south-facing slopes.

At Budock Water, just outside Falmouth, is tranquil Penjerrick – 15 acres of a wide-range of species that are found in warmer climates. It has a wild atmosphere with areas of informal planting including rhododendrons, magnolias, tree ferns and gunnera. Robert Were Fox who established the garden in the early 19th century was a plantsman who specialised in acclimatising species and was instrumental in shaping Glendurgan and Trebah Gardens nearby. Penjerrick is home to Penjerrick and Barclayi hybrid rhododendrons. Open on Sundays, Wednesdays and Fridays.

Cornwall seems to have no shortage of people with the passion to rescue lost gardens. Once a market garden, then a garden centre it had been closed for ten years when it was bought in 2000. Old stock at this four and a half acre site had taken over but what emerged from the brambles is a relaxing haven of mature trees, lush planting and the organic fruit and vegetables which give the Potager Garden its name. Working carefully by hand allowed many resident species from its commercial past to survive – a beech hedge, birch, maple, cherry, peach plum and crab apples. Newly-planted were Mediterranean favourites including fig and olive. There’s an indoor garden in a big greenhouse, hammocks, table tennis and boules and a café with homemade refreshments. Closed Mondays.

Close to Trebah and Penjerrick, Glendurgan was also owned by members of the Fox family who planted many handsome trees which remain today – conifers, magnolias and dogwoods as well as the unusual Tulip tree. There are the trees ferns, ubiquitous in this part of Cornwall, palms, bananas and other succulents. Some of the garden is wild and the grounds travel down three valleys to Durgan Beach. The famous Glendurgan Maze – waist height for adults – is great fun for youngsters, as is the Giant’s Rope Swing. In the care of the National Trust.

A trip to the Bonython Estate Gardens on the Lizard Peninsula really does provide something for everyone with a seemingly infinite variety of outdoor spaces. There’s an 18th century walled garden, a traditional potager garden, an orchard of Cornish apple trees and three lakes with themed planting – cool and tranquil trees and shrubs, the heat of a South African summer and an atmospheric quarry lake surrounded by ferns and bamboos. You will, of course, also find the popular rhododendrons, azaleas, woodland flowers and bulbs.

The Royal Duchy Hotel Cornish Experience package is the perfect chance to sample all of Cornwall's best bits. Available when booking 3 nights or more these complimentary extras are too good to miss, plus you can choose to include free tickets to Trebah Gardens! 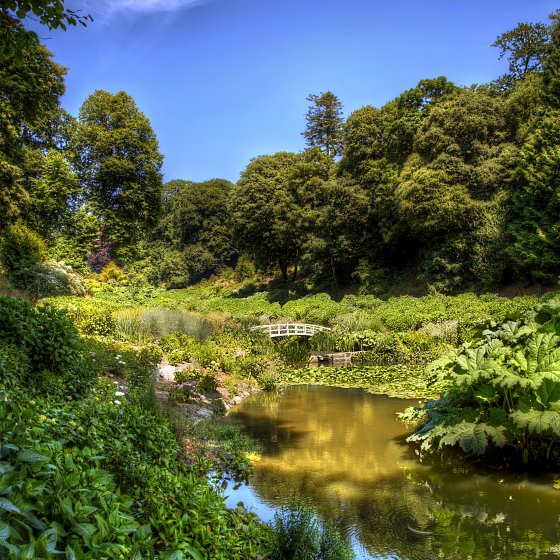