Stepping back in time at The Royal Duchy Hotel

The seafront in Falmouth has changed dramatically over the past few centuries and that is largely due to two things – the railway and tourism. Locals and visitors alike have been sad to see many of the hotels that dominated the landscape along Cliff Road disappear, with apartments built in their place. At one time there were more than a dozen hotels dotted along the seafront overlooking Gyllyngvase Beach, Castle Beach and Falmouth Bay. Some were destroyed by bombs in the war, one was destroyed by a huge fire, while others could not maintain trade and were forced to close.

Peter Searle, at the Falmouth History Archives at The Poly, said: “Falmouth was the destination of choice for elegant Victorians who wanted to come to the Cornish Riviera.” The creation of the railway was followed by moves to develop the town as a resort, with walks and beautiful landscape features laid out around Pendennis Point and along the horse carriage road around Castle Drive, which was used by guests until Cliff Road was built.

Falmouth’s tourism, leisure and seaside elements also continued to develop. The Royal Duchy Hotel started its life as the The Pendennis Hotel built in 1893 above the shoreline cliff west of the Falmouth Hotel, over time The Pendennis Hotel became The Hydro Hotel. The Brend Hotels group bought the hotel in 1977. The Victorian grandfather clock in the cocktail bar has been ticking away at the hotel for more than a century.   In fact, when Brend Hotels bought the hotel in 1977, the purchase was made only on condition that the grandfather clock stayed exactly where it was.

Today, The Royal Duchy Hotel has a reputation as one of the top luxury hotels in Cornwall and in 2018 became the only hotel in Falmouth to be given the award of 4 silver stars. The Royal Duchy Hotel is part of the Brend Hotels group, winner of 'Hotel Group of the Year' in the AA Hospitality Awards 2015-2016. We are delighted that these prestigious awards have recognised our warm welcome and passion for excellence within a hotel that has survived the generations. 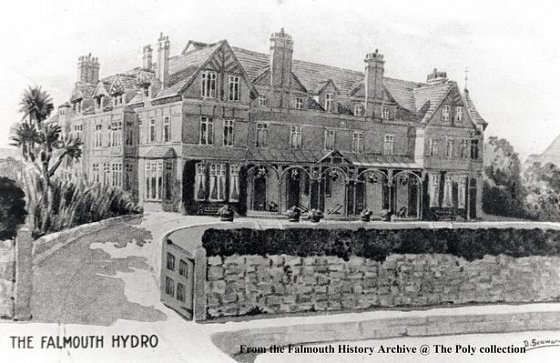